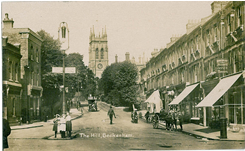 All maps are available from our On-line Mapshop or from selected bookshops in the area.

The following maps are all taken from the OS 25" maps and reduced to a scale of approximately 15 inches to the mile. They are extremely detailed, showing individual houses, details such as railway tracks, pathways, pubs, factories and even minutiae such as fountains and signal posts. Obviously they cover quite a small area, normally a mile by a mile and a half each. Each map includes an introduction. For further details click on the links below.

There is a separate page for Kent, beyond the London area. For them go to this page

These are the detailed maps currently available in the 'London in Kent' area. Information pages are available for each map; simply follow the links.